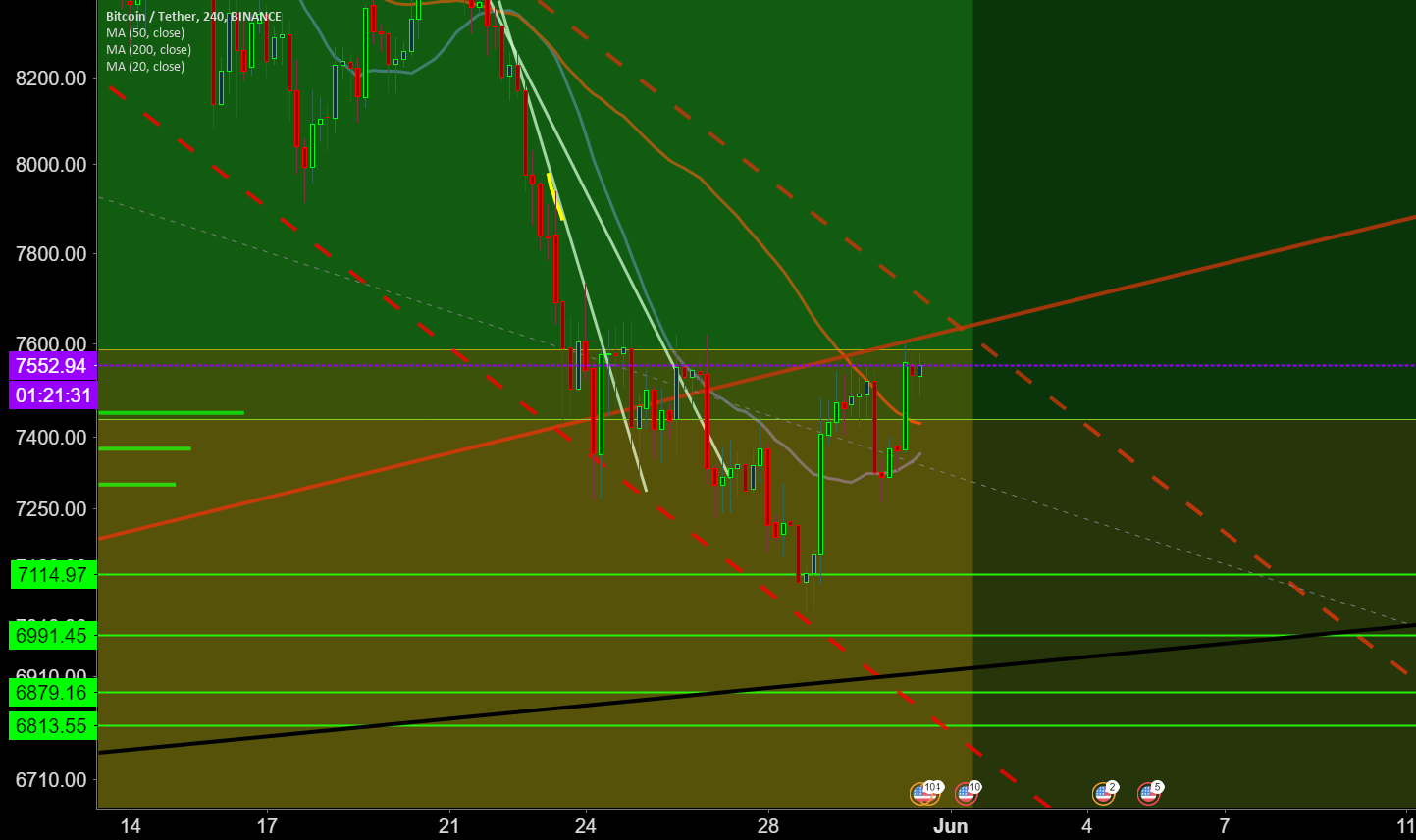 THIS IS BINANCE/USDT. IT IS LESS THAN 1% DIFFERENT THAN OTHER EXCHANGES, BUT IT IS USDT NOT USD. DO NOT USE SPECIFIC LINES AS BASE-POINTS AND RATHER LOOK AT THE AREAS WITH ABOUT A .5% DIFFERENCE IN MOVEMENT AT THE BOTTOMS. OR USE THIS TO GAIN AN IDEA OF WHY IT IS MOVING. BTC             MOVEMENT IS NOT RANDOM.

I’m no TA master or claim to be. I am a pattern finder and a self questioner.

On this chart the bottom line of the channel was put last night as a rough guess. The top part of the channel is simply the downtrend that was there before. I only say these before/after things to give everyone an idea hindsight bias – context. Because support lines and resistance don’t mean nearly as much if they are not respecting past data. What we want to know is, where are the current choices coming from and how heavily are these indicators being respected. Answering these questions gives us an idea when we see multiple indicators contradict one another.

I am currently waiting for the channel to break or for BTC             to break down. UPon that happening, I then want to see BTC             CONFIRM on a support before i buy in. I often see little point to buy in something after it has broken up past a resistance zone , but has not confirmed. Unless one is buying right when it hits it with a VERY short stop loss. But even that is risky.

Now that we’ve skipped the formalities, lets get to explaining the graph. I simply use 20/50/200 MA combined with fibs and lines. 200 MA generally is a resistance point, but is amazing buy indicator if it is then bought over and gives support. Similar to any trendline .

There are two fibs. One from 3511-19820 and another from 6k-11747. I know that it went slightly higher, I do not care. What i want to do is; zoom in, see where the average price was near the top and bottom, then compare that lines to the data from it. If it looks good i use it. For a fib is worthless if the lines are not respected. Any indicator is worthless if it is not respected.

Ok onto the black and red trend-lines. The original starting point of the red trend-line cannot be seen on BINANCE, but on other exchanges it from data slightly before that 3k range. It is not a buy signal for me. I only have it there to see if it is worth anything over time.

So PLEASE do not think that they are important at this time.

Last are the support lines from 6.8-7.1. These are simply based off of the VWAP areas from the last fall down to 6.4k, data from Last November, and zoomed in data from the 6k fall.

The chart should be self explanatory. I want people to be able to look at basic ta and make judgments. I believe that the more normal people that can understand basic ta, the better the whole scene will be.

Good luck and thanks for stopping by.