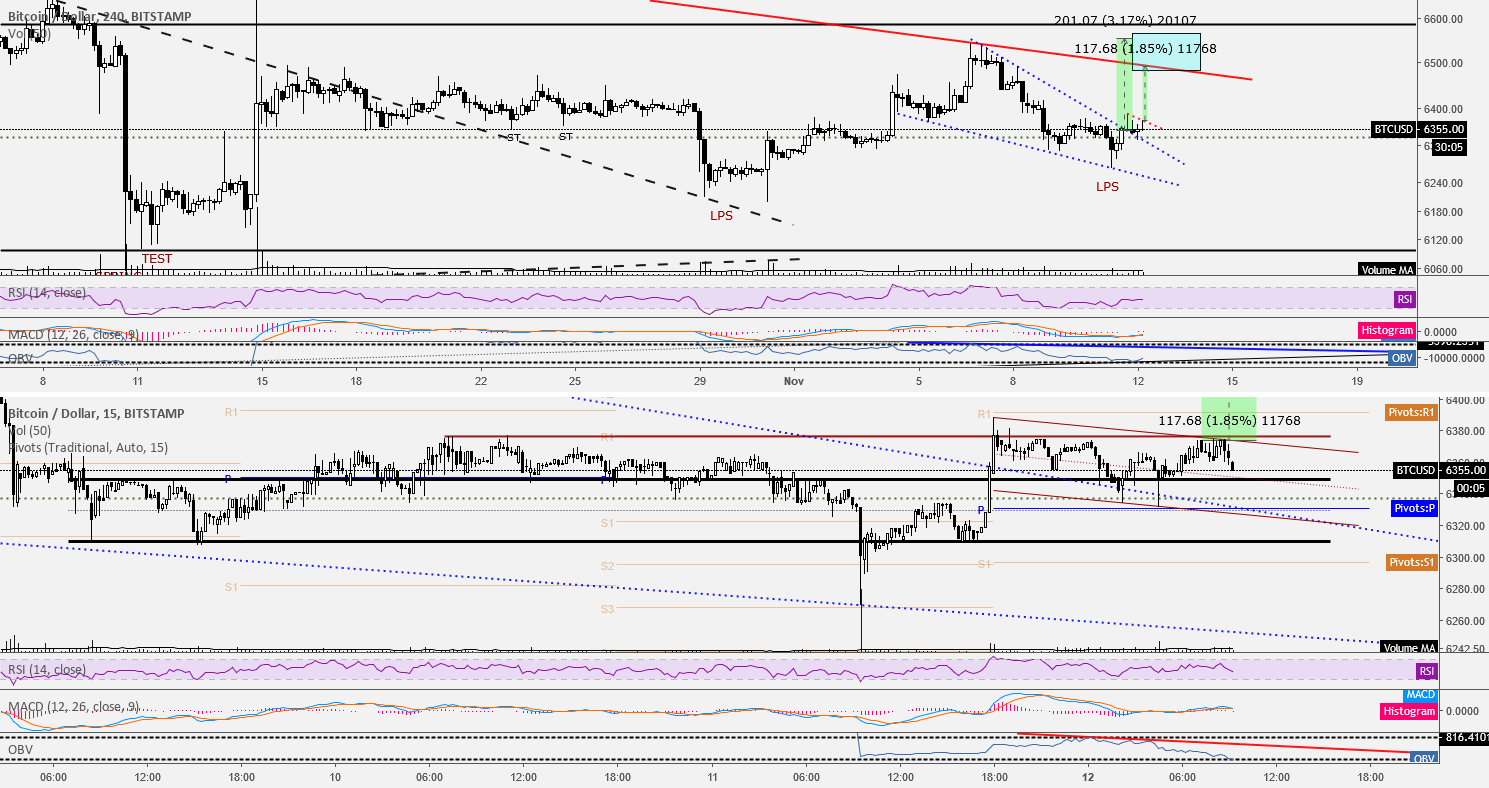 Good morning, traders. Over the weekend Bitcoin             dropped a bit more to a low of $6269.46 but held the general low from Friday which means it remained above the swing low of October 31st. The bounce off that drop targeted the 4H pivot , retreated to the equilibrium of the large trading range we’ve been in since the beginning of September, and is targeting the 4H pivot once more. At the least, I’m expecting price to make a run for the 4H R1 pivot at $6510, just below the local swing high of $6544 on November 6th             (which is the target of the dotted blue descending broadening wedge that price appears to have printed). A close above this swing high, especially on the 1D, should be bullish for the pair. The CBOE            Bitcoin futures             expire in two days on November 14th. Will we see volatility at that time? Last month we did not. However, traders should be prepared for volatility at the futures closes as that is what we have typically seen.

As mentioned above, price breached the resistance of the descending broadening wedge after its drop. This printed bullish RSI divergence between the November 9th             and 11th lows. It then tested that previous resistance as support and has continued appreciating. The 4H RSI is bullish at 50.5 and MACD crossed bullishly a few candles ago. OBV on the 4H remains a bit of a potential concern. It has been trending down since October 17th. However, it continues to remain significantly higher since its September 12th low. It does appear that OBV is printing an ascending channel , but we need to see it heading higher from here to give us a chance at confirming it. As long as OBV continues to trend higher as it has been since September 12th, the shorter term recent downtrend is nothing to worry about.

The 15 minute chart shows price printing a flag after the bounce off yesterday’s low. The target based on the pattern’s flagpole should be around $6491. This puts it at the 15 minute R3 pivot as well as just below the above-mentioned 4H R1 pivot . The light blue box is the expected target area based on the various patterns and pivots . A good, solid close in this area, above the red descending resistance line, should bring $7150 into play. However, this target does not exist until price actually closes above the flag’s resistance. Even then, as always, traders must use strong risk management as nothing is ever guaranteed and price could just print a technical break and then fall back. I have outlined the local TR             on this TF so that traders can continue to watch for movement into and/or out of the TR             , giving them a better understanding of price movement in this area. Price falling below the bottom of the TR             should indicate further downward progression which will have us watching the $6270 and $6200 levels for support.

The 1D chart shows price continuing to consolidate resulting in contracting volume and volatility . It also shows RSI sitting just under bullish at 48, having bounced off the previous resistance line. MACD is sitting just under centerline. OBV has been moving within a horizontal range since August 14th but is currently testing the resistance at the top of that range. This should hit the descending resistance printed by the October 15th and November 7th highs. OBV has remained in an uptrend since the October 11th drop in price. I will take a closer look at the 1D during this morning’s live stream.

Ultimately, we are watching for price to push through the upper black horizontal line which denotes the top of the resistance area at the $6800 level thereby creating a show of strength (SOS). The expectation at that point would be retracement and consolidation around that upper black horizontal line (possibly printing a pennant ) in the form of a “back up to the edge of the creek/last point of support” (BUEC/LPS) followed by another SOS above $7000. If that SOS-to-BUEC/LPS prints a pennant around $6800, then at this time we can expect a target of around $7600 when price breaks the pennant’s resistance. This would complete the complex fulcrum and should signal the bull market is likely in effect. Remember, a breach of $8500 gives us the higher high that we’ve been waiting for and would likely be a strong buy signal to many traders sitting on the sidelines. After that, $10,000 becomes the next signal, and then of course the February high around $11,780.

Remember, you can always click on the “share” button in the lower right hand of the screen, under the chart, and then click on “Make it mine” from the popup menu in order to get a live version of the chart that you can explore on your own.